Menu
Log in
Register
Install the app
You are using an out of date browser. It may not display this or other websites correctly.
You should upgrade or use an alternative browser.

When running real.exe we noticed the following warnings:
"points artificially set to land"

Since version 3.8, the change described below was implemented:

"In V3.8, we changed default surface_input_source option value from 1 to 3, which uses the dominant categories computed in geogrid. But we neglected that when dominant categories for land and soil are recomputed in real, the real program does checks for mismatches, making sure the lower resolution isltyp matches with landmask data. This has two effects: one is the actual isltyp, ivgtyp, and xland can be different from that from surface_input_source = 1 (a check later in real program effectively matched ivgtyp based on isltyp); and the other effect is that for certain cases, the WRF model would stop due to un-matched isltyp and ivgtyp. This change fixes this problem, and isltyp, ivgtyp, and xland are now identical to those coming from surface_input_source = 1."

Due to the recent implementation described above, real.exe then changes the landmask to have the same coarse, unrepresentative coastlines. Which is not what we want.

We have also tried the bnu_soil_30s soil categories which resolve coastlines much better. however, the inland lakes are not resolved or missing for some reason in this dataset (at least with the default GEOGRID.TBL). So, when real.exe runs, the lakes are removed from the landmask. Which is also not what we want.

After trying many diiferent approaches, we did the following:
To trust the landmask field created from the Landuse dataset (in this case, MODIS30s), we changed the following lines in the module_initialize_real.f90 to:

Does this sound correct? Or, am I missing another fix such as changing GEOGRID.TBL or METGRID.TBL entries to mask where water? Adding masked=water to the following entries in GEOGRID.TBL results in missing values over water. These pose a problem as SOILCBOT and SOILCTOP 3D fields should have 0s everyhere except where the soil category exists.
D

Staff member
There is a lot going on here.

1. The land use categories have many names: lu_index, ivgtyp, etc. The land / water mask should come directly from these fields. Is that not the case?

Can you show us some images of the before vs after?

Staff member
@scapps,
Can you also attach your namelist.wps and namelist.input files so that we can take a look at that too? Thanks!
S

Here is a png showing the "blocky", low resolution coastline along California: 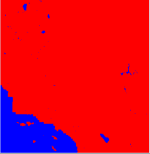 That should be resolved much better since this is at 2km resolution.

Here is the same plot after forcing the landmask to be created from the lu_index field: 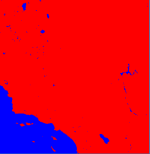 The first two plots are from met_em file generated by WPS. The second two are from real.exe

Is there some update to fix it on new WRF releases or the best option is to use the solution proposed by scapps?

Thank you for any help.

Staff member
Taoan,
Can you provide some additional information regarding your case? Please let me know the resolution of the input data, the version of WPS/WRF you are using, and please include your namelist.wps and namelist.input file. Thanks!
T

Sorry for the delayed response.

I am working with a 1km resolution grid.

I attached my namelists for checking.

I applied the solution proposed by scapps and it solved the problem. However, I think it would be usefeul to improve the new versions of Real with the ability to prioritize the input landuse map when define landmask and interpolate the data on grids.

I am using REAL_EM V4.0 PREPROCESSOR

Staff member
Hi Taoan,
Thanks for clarifying. I guess I'm still struggling a bit to understand the problem and whether it's different than the other user's issue. In the plots you sent, it looks like landmask was shown at a much higher resolution after running real.exe, and therefore you weren't still experiencing the "blocky" problem the previous user was experiencing. Or was the second plot you sent showing the improvement after you used Scapps's solution? If not, please clarify the following:
1) Are you using a new soil or other type of landuse input data? If so, what is the resolution of those data?
2) What variables are showing problems, and after which stage of the process (e.g., after real.exe)?
3) What is the unwanted outcome that is occurring?